Whirlaway is Jen Lazowski and Christine Kitsch, .   Jen Lazowski started Whirlaway Kennels in 1997 starting with her foundation bitch "Tulli" .   Tulli's daughter Maddie produced a lovely bitch named DC Whirlaway's Jubilee Song  "Echo" who is co owned by Christine Kitsch.  Chris joined the kennel and added wisdom, extensive animal husbandry knowledge and a smooth, gentle hand with the dogs.   Echo would later produce Ida Belle who would become the # 1 Ridgeback in 2012, a National Specialty winner,   winner of the 2013 Westminster Best of Breed. and the 2012 winner of The Eukaneuba Classic .  Echo was also the dam of Whirlaway's Charm Offensive " Nova" who produced " Scotty" who is a Multiple Group placing and Multiple Owner Best in Show dog and her granddaughter Delta who just won Best of Opposite sex at our National Specialty 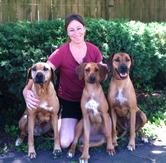 Every breeder's dream is to breed  beautiful dogs that people recognize and identify.  The goal is consistency.  This goal cannot be uncoupled from the goal of producing dogs with excellent,  sound temperaments and dogs that are healthy, and long lived .  The above picture is of three dogs from 3 different litters and 3 different dams.  This was one of our proudest days