SELECT BITCH FOR DELTA AND AN

AWARD OF MERIT  FOR SCOTT AT THE WESTMINSTER KENNEL CLUB 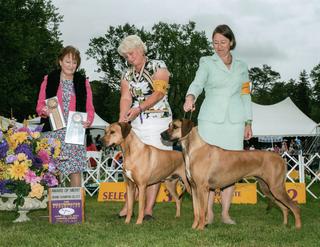 THE SCOTTY DOG at our National Specialty!

Reece took Best of Breed at THE NATIONAL DOG SHOW in Philadelphia last week,  made her TV debut on Thanksgiving day 2022  She also took a placement at our National Specialty in Ohio in the very competitive Bred By class!  Delta received an Award of Merit in Ohio and our new Lila/Scott puppy Levi took 3rd in Sweepstakes and in the 6-9 class in Ohio.  Three of Scotty and Maribelle's kids finished their championships this summer (2022)  Marykate..Whirlaway's Whirling Dirvish finished at the Skyline shows in June,  Wilson finished at the Greensboro NC shows and Hunter finished with 4 majors his last being at the Doswell shows at the end of August.  These three were such good examples of what we were trying to accomplish with the breeding.   Their sister Reece placed at our National Specialty so our goal is to finish her championship as well.   We had two lovely litters.. Lila and Scott and Delta and Argos.   So excited for those pups to mature!!

We had some great successes  in 2021 at the big shows and some great successes in the whelping box.  Scott and Delta both took home ribbons from Westminster, both owner handled.   Scott took Select Dog at our National Specialty.  So proud of him.. Love that little dog!! Virgil and Delta had a lovely litter of 12 2 of which are pointed and Maribelle and Scott had 8 lovely pups.   3 of them are making their marks in the show ring already.   Wilson took a Best of Breed from the puppy classes and is now being shown by Darlene Bergan,   Hunter has a major from the puppy class and will be shown by Jen.   Reece took a placement at our National Specialty in Mesquite Texas.   Mac and Champ finished their championships.

There is a silver lining to every cloud.  While our dog show wings have been clipped, the nature of performance events allowed for them to start up and run again!.   We've attended lure coursing events,   Fast Cats and nosework trials.  We've actually earned some online titles!!   Virgil and Mac have earned their QC and JC titles in Lure Coursing. Lila earned their JC title in lure coursing,  Mac and Champ have two good runs towards their Fast Cat titles as does Lila Luke earned his Fast Cat B title!!!  Mac earned his Advanced Trick Dog Title and Virgil and Lila have earned their Trick Dog Novice titles.   Lila has 1 leg towards her container title in Nosework.  So thankful for these performance events.  So much fun!!

DELTA WON Best of Opposite Sex at our National!    Virgil (Scotty x Maribelle) was Best in Puppy Sweepstakes! and Lila won the very large Open Class an earned her CGC!  Lila also finished her Championship last week in Doswell Va!  Mac ( Scotty x Maribelle) got his first point in Doswell and Amazi (Scotty and Maribelle) finished his championship!  Scotty's daughter Stevie won her huge 12-15 month class at the National.  Marykate earned both her majors at York in March before the shut down and 2 more points in Salisbury.  She is lovely and loves to run too!!

Delta was AWESOME at Westminster.!   She was awarded an Award of Merit by respected judge William Shelton.   Earlier in January, she took two Best of Breed awards in Richmond Va!

​Scotty also became a dad last August siring a lovely litter bred by Rhoda Springer has since had two litters with Whirlaway's Georgia Peach and just recently 9 puppies with Whirlaway's Fog Seay (Maribelle).   10 pups out of the lovely Jane. 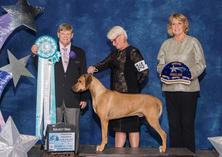